Why RFC is a workplace culture nerd’s dream (and nightmare)

Why RFC is a workplace culture nerd’s dream (and nightmare)

It actually causes me pain to write this.

The Richmond Football Club should be a lesson to us all.

Ok, now I’ve managed to actually get those words out there, let me offer a couple of disclaimers.

#1 I love footy. AFL footy that is. I mean, come on, is there really any other kind? I am a passionate, lifelong supporter of the Carlton footy club. I wrote a blog which talks a little bit about that here.

#2 I am not, however, a fan of the Tigers. In fact, I will be the person always barracking for whomever they are playing on any given day. Yes, even Collingwood. Insert shocked face GIF.

Why then does an avid misanthrope (thanks Mr Roget, a much nicer word than hater) sing the Club’s praises so often and so bloomin loudly?

It’s all about the culture.

The simple fact is that the Richmond Football Club is a brilliant example of the vital role clarity and alignment plays in creating exceptional workplace culture, which in turn is necessary to thrive and succeed. Which, incidentally, is pretty damn close to Richmond’s purpose of Connecting to Thrive and Win.

What Richmond have done to count as exceptional.

Any one remotely familiar with footy knows the basics of the fable.

The last premiership the club had won was way back in 1980. Following that win, the club suffered through many inglorious years, including a period when fans nicknamed their once proud club ‘Ninemond’[i].

Even once some success started to flow, the Club continued to fail to meet expectations. For example, managing to just scrape into the finals but then falling over at the first hurdle.

I wouldn’t be a true Bluebagger[ii] if I didn’t mention the infamous 2013 example of this, when Richmond snatched defeat from the jaws of victory against a Carlton team that only snuck into the finals due to the suspension of 8th placed Essendon.

Change was in the air however, and it started with the appointment of Brendan Gale (hello fellow ex-Tasmanian) as CEO in 2009. A former club stalwart on the field, Gale had spent his post playing years quietly going about his business including earning a law degree and taking on the role of head of the AFL Players Association, which is basically the players union.

Gale came in with a clear vision for where he wanted the club to go; and he was clear to articulate it loudly and proudly despite the derision the ambitious vision received.

Around the same time, a major change was happening at Board level. Peggy O’Neal was declared Board President in 2013.

O’Neal has become famous for saying

If you get the culture right, success follows.

Did someone say *fangirl?

This belief has become enshrined in the club’s corporate strategy.

After the Club’s first premiership for 30 years in 2017, Gales did not rest on his laurels (sidenote: what the heck are laurels?) but instead moved to take the culture to another level. Part of the process to do just that, included the appointment of a new head of HR and also the formation of a collaborative group across the club that developed the club’s Cultural Foundations.

Make sure your purpose resonates with all your staff and stakeholders. Avoid the use of fancy words, long-winded statements or corporate speak. Engage your staff in the process of discovering or re-discovering your purpose – it is your organisation’s purpose, not your own purpose or the leadership team’s purpose.

Link everything you do back to your purpose as that will bring it to life. Ensure that you, your leadership team and other purpose champions continue to prosecute the case – and most importantly, do all that in a very authentic way.

The foundations detail the Vision [Strong and Bold Premiership Club] which links to the Purpose [Connecting to Thrive and Win].

The Values [Aware, Disciplined, Relentless, United] in turn link back to the Purpose and the Behaviours [ie Make the most of our strengths & Help others to do the same] define how the values will be lived.

How’s that for clarity and alignment to vision and purpose!

Ask anyone here what’s our purpose and they say, ‘connecting to thrive and win’. It just resonates so strongly, and they get it. They understand what it means to them. They’ll probably tell you something about feedback or taking on challenges, they’ll be able to give you elements of the five behaviours. But without fail, they will all say connection to thrive and win. [Club insider].

There are, naturally, other elements to the on-field success story of the club that has netted three premierships in the last four years.

Some of those elements include:

What a powerful weapon for team connection and cohesion!

Oh, and a player by the name of Dusty Martin has also had just a little bit to do with those premierships. Or so the fact he is the first ever Triple Norm Smith medallist would indicate.[iv] 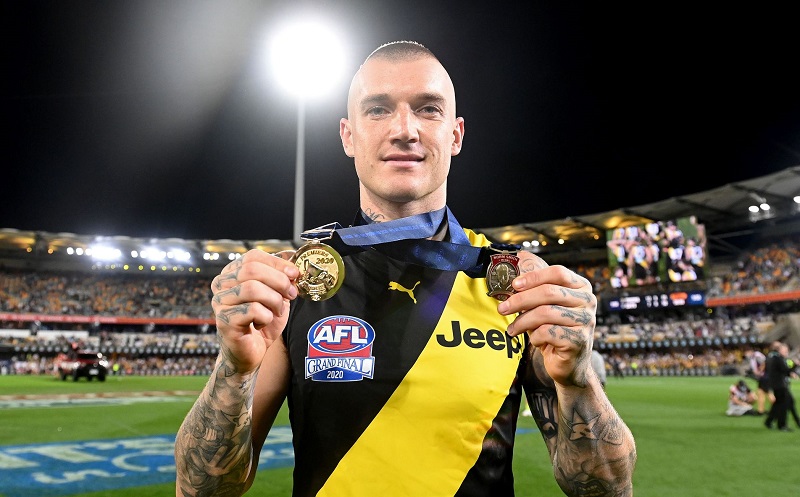 The importance of alignment to Purpose.

Brendan Gale and the RFC get it. It really is that simple.

Our purpose, in conjunction with our vision and values, has further united us and strengthened our culture. It is helping us to develop that “something” deep down inside that will bind us together. It also provides something to guide us, to draw upon and to sustain us in difficult times.

We are so much clearer now as to why we exist, where we are going and the way we want our people to carry themselves…

Linking everything back to our purpose has been very powerful. Our staff are much more engaged, they feel much more connected, they contribute greater discretionary effort and all that helps us deliver better results.

Some of the ways the club continues to connect back to their purpose is by utilising cross functional groups; such as the initial collaborative group formed across all levels and departments of the club, brought together to develop the Cultural Foundations.

There have been at least six such groups formed in recent years, including a Diversity in Action Group, an Action for Women Group, and a Good Environment Group.

All brilliant examples of an ongoing, organisational wide alignment with the club’s purpose of connecting to thrive and win.

Ultimately, humans are purposeful, you get out of bed because you want a purpose. You want to contribute to something, and you want to feel valued. And if we can do that at work, where most people spend most their time. Well, that’s a great thing. [Club insider].

If you would like to talk about how Workology Co can help your organisation co-create exceptional culture in order to thrive and win, then reach out via alison@workologyco.com.au

Carlton FC, I’m looking at you. We need to get to #17 before those Pies or Bombers do. Or, god forbid, the Tigers.

[ii] ‘Bluebagger’ is a nickname for supporters of the Carlton Blues

[iv] The Norm Smith Medal is given to the player judged best on the ground during the Grand Final.