Why a people-first approach is no longer just a ‘nice to have’.

Why a people-first approach is no longer just a ‘nice to have’.

When most people think about how to successfully run their business, I warrant that for the most part, they intentionally plan to adapt a profit maximising approach.

However, there is a growing number of business leaders who understand that a people-first approach is what makes the difference between surviving and thriving.

Which is why I want to take this time to explain to you what a people-first approach is all about.

The leaders of people-centric companies understand that it’s people who make their company successful. These companies realize that when people feel valued and cared for, they do their work with stronger intrinsic motivation, a deeper sense of meaning, and a greater level of engagement. They go the extra mile simply because they want to contribute to an organization that cares about them. (Forbes)

A profit maximising approach on the other hand does not prioritise the people of an organisation above all else, including shareholder value and profits.

I met with Stephen Carter from recruiting agency Sharp & Carter as part of my research for Workology Co’s white paper.

‘Carts’ as he tends to be known, is a great bloke and the agency he heads up is very successful.

I was fascinated to discover that after switching from a profit maximising to people-first approach, Sharp & Carter’s growth was exponential.

These days, most businesses that that operate like that recognise at some level, in order to maximise profit, they’ve got to look after people. And we did that, we did that pretty well. But when, instead of being a profit maximising business, we became a people-first business where we put our people before our profit… that’s led to, over the last six years 1400 percent growth. Which is 55% growth on average per annum; which is amazing, isn’t it?!

How does a people-first approach work in practice?

After an extensive recruitment exercise, your new starter’s first day finally rolls around.

Things have been going along swimmingly for the first month or so of their qualifying period of employment (otherwise known as ‘probationary period’).

At the start of the second month of our new employee’s tenure however, you discover that *Sophie has been diagnosed with breast cancer.

A tough break both for your business (you really need Sophie fit and able to perform her role and you have just spent a tidy sum on recruiting her) but mainly of course, for Sophie.

Now technically because Sophie is in her probationary/ qualifying period of employment, you could (very carefully) bring her employment to an end at any stage without explanation or justification.

Note, I did say very carefully. There are legislative protections against discriminatory behaviour for persons suffering illness or injury. This is not a blog post dedicated to explaining this issue any further. If you need anymore information, here is a great article by top tier law firm, Clayton Utz, that sets out some of the challenges.

A leader who adopts a profit first approach, when faced with Sophie’s choice (see what I did there?!?) will probably curse and swear at the money already lost in recruiting Soph, but ultimately decide to cut their losses and carefully exit Sophie from the organisation in order to begin the process of finding her replacement.

What will a People-First leader do? Well, they will tell Sophie they are not going to fire her, that they value her work and contribution far too much for that. 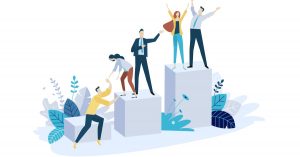 Instead, they will tell Soph she can have has much or as little time off work as she needs (I have it on good authority that chemotherapy can be a bitch when it comes to side-effects) and that any leave she does need for either treatment or recovery will be paid time off.

Our people-first champion will also discuss with Sophie any changes she needs to make to her working arrangements, for example working in shorter bursts of time, or potentially working ‘after hours’ when she feels most energised.

What does this people-first approach mean for Soph, the leader and the business in the long run?

Thankfully, Sophie’s treatment for the cancer is a great success and Sophie is declared to be medically in remission.

Sophie feels valued by her CEO, and relished the opportunity to keep working during her treatment as it gave her something else to focus on rather than the big C.

Above all Sophie is grateful for how she has been treated – and the odds are very good, that she will become one of the most loyal, hard-working, and dedicated employees the company will ever employ.

Adopting a people-first approach is not always going deliver you the massive financial growth that we heard about from Stephen Carter.

But it will mean you are following one of my favourite mantra’s courtesy of Sir Richard Branson:

And when this happens, the magic flows – and your culture moves from good to great, and your business thrives instead of simply survives.

Do you adopt a people-first approach in your business? Do you want to? How might that look for you?

If you would like some help introducing a people-first approach in your business, then reach out and let’s chat.

You can book a time to do just that here.