An article stood out to me recently that appeared across several of my social feeds.

The article was titled  “Why an uninformed workplace is bad for business”.

The cautionary tale revolved around the bad business practices of Steve Jobs wannabe Elizabeth Holmes; so bad in fact that she has landed herself a 20-year stint in the big house.

One of Holmes’s organisational strategies included what the journalist described as deliberate siloing, and next to no communication with employees.

For nearly two decades I worked with toxic workplace cultures, advising the client organisation as to the best way to deal with fallout from the latest incident indicative of said culture. (Think workplace investigations, grievance resolution, disciplinary action, unfair dismissal claims to name a few).

These days I choose to work with organisations that value workplace culture; where deliberate steps are taken to measure culture, retain the good elements, or grow/improve an existing culture.

One of the key ingredients that distinguishes ‘good’ from ‘bad’ culture, is the type and level of internal communication.

In one corner, at one end of a spectrum, are the organisations that we might call “old school”. These businesses are only interested in dollars, and do not view employees as anything other than a means to an end.

Their mindset may be along the lines of “They get paid every week. The shop’s safe. Why do we have to do anything else for them? They should be thankful they have a job!” *

Members of the Executive will sit in offices with closed doors and are unreachable to anyone other than senior managers or their PAs. Decisions are made in secret, results (good and bad) often only become known to employees through the media.

In short, two-way communication does not happen in these businesses. Leaders are not available themselves, nor are they interested in hearing what their people might have to say.

There are businesses like this that still exist in Australia. I know this for a fact, in part because I have consulted to them, and most recently because of research I am conducting on Australian workplace culture via HR practitioners.

Businesses who do not see the ROI in engaging in staff surveys. Or think “Town Hall” refers to one of the new stations being built as part of the Melbourne Metro Tunnel project. Who think a scripted, ultra–slick bi-monthly video will meet employee’s desires to hear from the ELT (It doesn’t. Employees want to see and hear from leaders in the flesh).

At the other end of the spectrum, I am thrilled to be hearing what progressive organisations are doing in terms of workplace culture.

Whilst you will have to wait for the white paper to hear the complete story, for now I can share that there are Aussie organisations who recognise that the future of work, perhaps now more than at any other time in history, lies in valuing our employees as real, authentic people not just robots performing a job.

I’m happy to report that some of the businesses I have interviewed for the white paper, are shining examples of this new paradigm.

One example is the digital start-up of around 200 employees, who recently determined and populated the company values.

This didn’t happen through a collaboration between HR and Marketing. Instead,

It’s the same with personal relationships.

And if you feel valued in any relationship, you are invested in its success.

Which begs the question – why aren’t all organisations engaging in conversations with their teams?

The old school style businesses will say they don’t need too. They are still making money, and if ‘it ain’t broke don’t fix it’. They might be frightened to listen to their employees or lack the skill to do it. Or just be plain old pig headed about the need to listen.

Side note: being prepared to listen to your teams, does not mean you have to do everything your employees suggest. However almost as important as listening, is demonstrating that you have considered employee opinions. Followed up by communicating whether you can/cannot act on those opinions (and why/why not).

Perhaps the biggest problem is the lack of direct and obvious correlation between the investment in time and effort required to listen vs a positive impact on the bottom line. 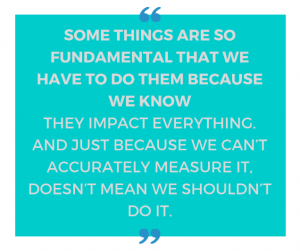 “Something doesn’t have to be a metric to be practical. Measurement is a tricky animal.

“Lots of executives say, ‘Tell me what the ROI of this activity is.’ There’s nothing wrong with responding, ‘Calculating the ROI of this is really difficult. In fact, it might be impossible. Because you can’t isolate any one variable. But the ROI is massive nonetheless.’

“It’s as if my wife said, ‘What’s the ROI of us improving our marriage? Will the kids’ grades be higher? Are we going to have a better financial outcome?’

The reality is, the world is changing. People want to be seen, heard and valued at work.

If you don’t get on board, you and your business will be left behind as you will lose the battle to attract and retain talent.

It’s only a matter of time.

Interested in learning how to improve two-way communication with your team members? Contact me for a confidential chat on 0400 019 599 or via alison@workologyco.com.au

*This was a direct quote from a participant at a recent Workshop I facilitated, targeting Senior Managers to provide them with tools to improve employee performance.