How to be a STAR when giving feedback

How to be a STAR when giving feedback

Effective and regularly given feedback is a well-known driver of engagement.

Knowing how to deliver it is an essential tool for every people leader to have in their kitbag.

Recently I facilitated a session on how to coach employees for performance improvement, and as you might expect, how to give effective feedback – both positive and developmental – was a key element of the training.

Positive feedback for when you catch your people doing something right, recognition that they are doing a good job.

Developmental feedback for times of under performance or failure to meet expectations (yours, the team, the business as a whole).

One of the most interesting comments to come from this session was an observation shared by ‘Will’ an older, very experienced manager.

After the obligatory role plays, ‘Will’ shared with us that he had spent approximately five minutes preparing for his turn as manager, working through the steps we had previously discussed.

Will noted that he was shocked to realise just how much that relatively small amount of preparation had assisted him in delivering what was necessary, but uncomfortable, feedback.

“I never spend even a minute back at the office preparing for this kind of thing. I did now, because I didn’t want to make a complete fool of myself in front of the others. But it only took 5 mins – 5 mins! And it made a world of difference. Surely, I can find 5 minutes back at the office, after all, it’s more important than giving feedback here”.

So here is my challenge to you – I want you to share in the benefit of Will’s light bulb moment, and commit to doing four things: –

Bonus points for anyone that wants to drop me a line or post a comment on our socials, telling me how well this little task went for you.

OK Alison, that’s all fine and dandy – but you were going to tell me how to deliver this feedback, remember?!

First though a caution: –

When preparing how you are going to tell someone in your team that they are not meeting expectations, you need to make sure that your mindset is all about helping the person improve. This is not about wielding the big stick – that might need to come later, if ultimately there is no improvement in the performance.

But for now, the focus is on ways of helping your team member move to where you want and need them to be.

One of the ways of doing this is by using the STAR/AR method of delivering the actual feedback.

The STAR/AR method focuses (as any form of feedback should) on the behaviour that is an issue, and the impact of the behaviour – the why it is a problem. 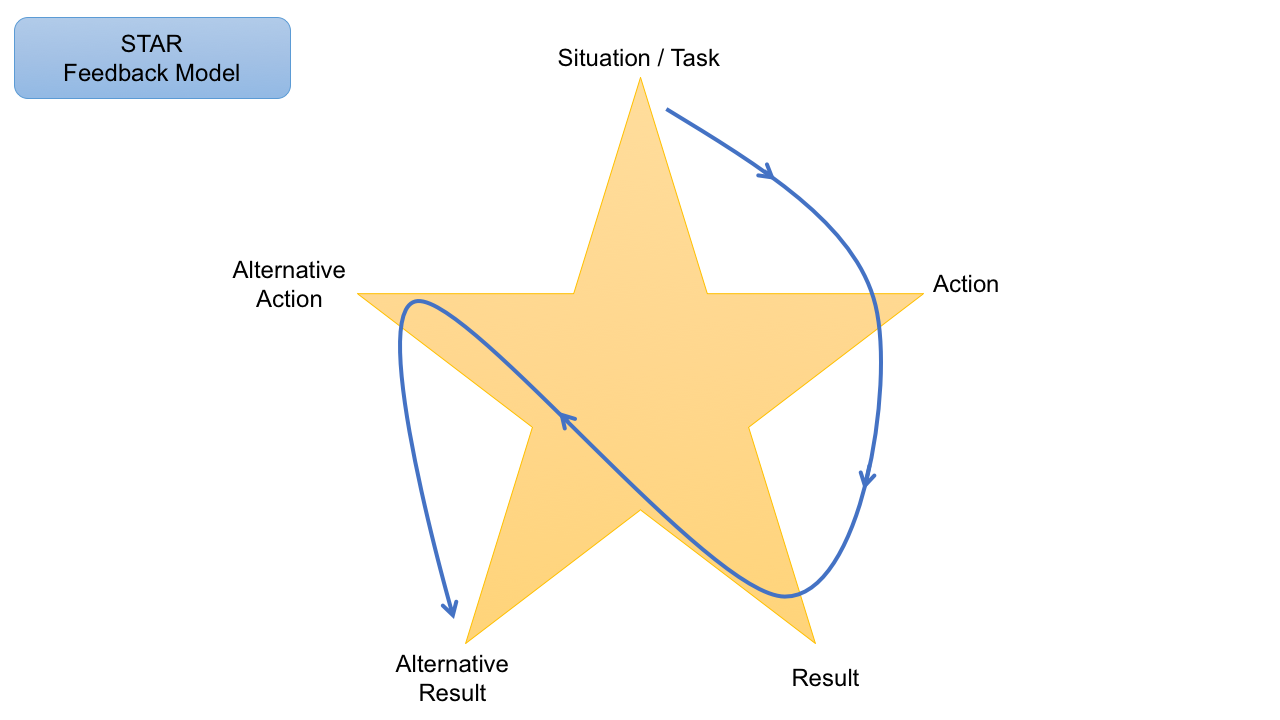 Situation/ Task -provides the context or circumstances that surrounded the behaviour

Action – the action the individual took; details of what they said or did or how they handled the situation

Result – consequences of what the individual did

Alternative Action – something the individual could have done or said differently

Alternative Result – the enhanced result the alternative action may have produced

Take for example a scenario one of the participants in this recent training shared.

One of their team leaders (let’s call him Bob for no other reason than its easy to spell) recently made a mistake and sent the wrong shipment to a customer overseas. Because the usual two-person check process wasn’t followed (Bob’s direct report ‘Shelly’ was away on holidays), the incorrect order cost the company a very substantial amount of lost moula.

Not to mention the damage to the company’s reputation and relationship with the customer – in what happened to be their first transaction with this customer.

Now whilst Bob’s manager might have been tempted to let fly with some colourful expletives aimed directly and loudly at Bob, such a short-term response would have been at best unhelpful and at worst, could have laid the manager open to allegations such as claims of bullying from Bob.

Instead, Bob’s manager would have been better off preparing STAR/AR feedback to give to Bob.

Something along these lines: –

When you processed the order for our customer X.

You did not follow our required two – person checking process.

This meant that the wrong order was sent to X and we now must recover this order and send the correct order. This will cost us $X to fix and has also damaged our relationship with this vital new customer, who is unimpressed with the delay and the error.

I need you to devise a process to cover situations when either yourself or Shelly are absent and nominate who can be the second person required in the two-check process. Let’s talk about who those alternative checkers can be.

See how much easier it would have been for Bob to hear this feedback, rather than the colourful and loud version we initially suggested?

Bob is probably already feeling dreadful about his mistake and is likely to be defensive when his manager calls him in to discuss the issues. This in turn is likely to mean Bob struggles to hear the real message his manager wants to deliver.

By concentrating on the behaviour that is the problem and the impact of the behaviour, Bob is less likely to feel he is being personally attacked. And therefore, more open to receiving, hearing and acting on the feedback.

So, there you have it. A quick and effective way to deliver much needed feedback.

If you would like assistance to upscale your leaders so they can effectively deliver feedback to their teams, then reach out here.