D is for Difficult Conversations

D is for Difficult Conversations

Jason is a member of your team.

He’s been with you for a few months now, and he’s a pretty good addition to the team.

Ok, yeah, you’ve noticed a couple of times in team meetings that he says something that doesn’t always seem to land well with the rest of the team.

But you’ve figured he’s still pretty new, and he’s probably just trying to get the lay of the land.

The problem is, today Susan came to you to complain about a couple of things Jason had said and done to her. She used words like ‘belittling’ and ‘humiliating’.

Susan’s adamant she doesn’t want to turn this into a formal complaint, but she says she’s tried to talk to Jason about it and he just ignores her.

Susan has asked you to have a conversation with Jason.

Yep. There’s that niggling, uncomfortable feeling in your gut.

The one that is starting to tell you pretty darn loudly that it’s time.

Time to have a difficult conversation with Jason.

If you are a leader or manager at any stage of your professional career, then I’m guessing at some point you will have to have  one of those conversations.

And whilst difficult conversations are a necessary part of life (personally and professionally), I would bet good money on the fact that when we are faced with a situation where we need to have one, most of us feel that churning in our gut.

Why? Partly because they tend to be uncomfortable, difficult and managers often (quite rightly) fear the possibility of conflict arising; or in a worst case scenario, having to deal with some form of litigation when / if the conversation goes pear-shaped.

One thing that undeniably helps fight the fear surrounding the notion of ‘difficult conversations’ is providing all employees with training on how to have them. Which is why the next part of this blog is titled…

How to have difficult conversations.

Instead of calling it a ‘difficult’ conversation, reframe the title to a ‘clear’ conversation. Or even ‘crucial’.

The Oxford definition of ‘clear’ is easy to perceive, understand, or interpret.

So how about this:

Before you start the conversation, make sure you allow some time for planning. Do not under any circumstances attempt to have the conversation in the heat of the moment.

I-statements are an excellent tool for this.  They look a little like this.. 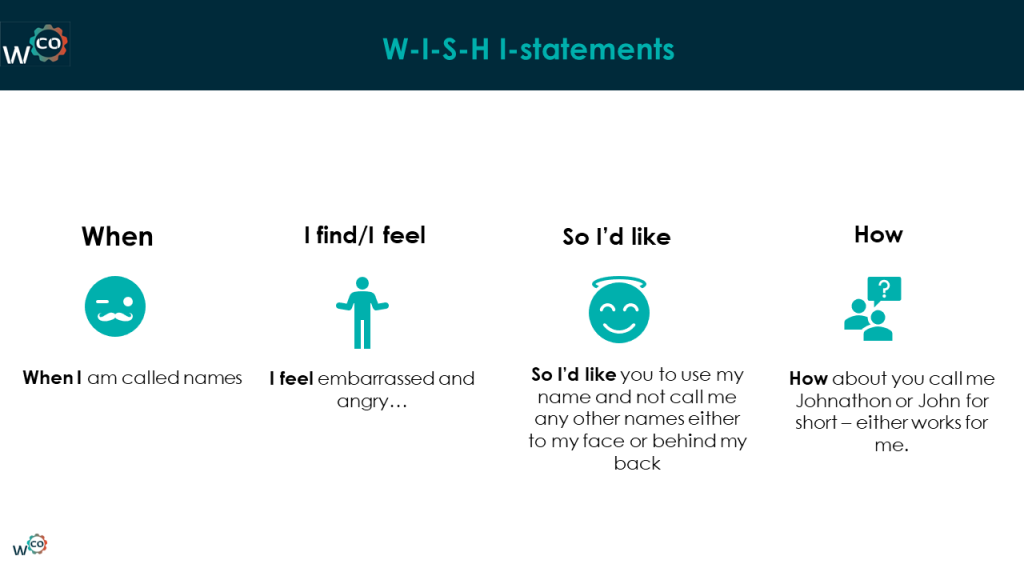 Even better, practise the clear conversation with a trusted party and workshop potential responses.

You should also think about the when and where of holding the conversation, and determine in advance the level of formality.

Wherever possible, it is always best to provide a real life example of the issue you are discussing.

Let’s turn to the case study at the start of this blog.

If you are Jason’s manager, you might say something to him along the lines of this.

‘Jason, I need to discuss some concerns I have about your behaviour. I noticed in our team meetings that you have interrupted several times when other people have been speaking, and spoken over the top of them. I’ve also heard you say a couple of times ‘I’m surrounded by idiots’. And I know you’ve laughed that off as a line from The Lion King, but I noticed people looking uncomfortable when you say this. It’s important that all team members treat each other professionally and respectfully, so can we talk  about what that looks like for you?’

4) Listen to their response.

No, I mean really listen. Not just a half-hearted, tick a box kind of listening.

I mean ask questions, share perspectives, and identify their concerns.

Identify their concerns by paraphrasing back to the other party what you heard – to ensure you did,in fact, hear them correctly.

Keep an open mind, be solution focused, and try to avoid using ‘but’.

Check back in at a later date. “Hey Jason, I just wanted to check how you are doing following our conversation on Tuesday? Anything you need me to clarify? Any feedback for me?”

Ok, well, we’re all human. So maybe ‘perfect’ is a bit of a stretch when it comes to these types of conversations.

The key is to start small, have regular and frequent conversations from time to time, including informal conversations about smaller issues.

This helps build familiarity, so when you need to have a clear conversation about a bigger issue, it’s not such a big deal for the recipient.

All of these tips will help you, as well as our fictional manager at the start of this blog, to have clearer, and overall better, conversations with team members.

Curious about what happened to ‘Jason’? That’s a story for another day my friends…or if you have a ‘Jason’ that you need help dealing with,  then give us a call and let’s chat.

We promise it won’t be a difficult conversation.