The blog where I attempt to come out from behind the brand.

The blog where I attempt to come out from behind the brand.

Upfront, I need to ask you to forgive me if you think a blog all about me is self-indulgent.

But lately it seems, in that strange coincidental way (like when you start being interested in buying a type of car, you start seeing that model everywhere), that I keep hearing a version of a particular message.

Which is all about the importance of ‘coming out from behind your brand’.

The message has been delivered to me in many ways – Carlii Lyon (Miranda Kerr’s former publicist) describes this as: –

When it comes to putting yourself out there and building a personal brand, the market does not want to see perfect. Shiny and perfectly scripted is a thing of the past. The market wants real, honest and thoughtful.

And one of almost daily articles that keeps crossing my path on this topic said it this way: –

…instead of bright and flashy lights, humans want to see the REAL people behind a business. More and more people are leaning towards going local, trusting people rather than shiny brands, and are choosing to purchase from humans LIKE THEMSELVES…[This means] YOU are your biggest marketing asset, and that your magic is simply being yourself and communicating yourself to your audience”.

But apart from my voice in the writing, there hasn’t been a lot of ‘me’ in said blogs.

Hence for this blog I thought I would share what I learned about myself, and the importance of having a goal or purpose, in order to survive my self-enforced month without booze in June 2018.

For those of you playing along on Insta or Facey, you will already know that I decided to do #nogooninjune after being inspired by my PT that I call ‘Yoda’ (and most other people call by his actual name, Brendan).

As Brendan says on their fundraising page, he and his two brothers Daniel and Josh, decided to embark on the “Year without beer” crusade after realising the devastating effects alcohol had on one of their family members who suffers from epilepsy.

In Australia, we are a nation of drinkers. Try to name the last social occasion that you attended where there weren’t people boozing. It’s hard isn’t it!

And Yoda and his brothers are bang smack in the middle of the demographic that consume the most amount of grog.

So, for a footy playing lad to go a whole year without consuming any alcohol; well, that is pretty impressive in my book. And to thereby raise funds for epilepsy research – currently sitting at just over $20k- then extra kudos goes to them.

As Yoda has become my mate as well as my PT, I decided I needed to do my own little part to support their efforts. And as I was learning and blogging about the importance of ‘purpose’, especially to Millennials, I thought it kind of made sense to put my money where my mouth is. 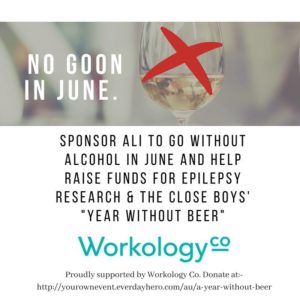 Now I get that a month sans vino doesn’t sound like that much of a deal to some people. But for me, it is and was.

One of the things that I learned over the month was that I drink alcohol not just because I enjoy the taste (which I do) but because it makes social occasions a bit more sparkly and fun. I also tend to crave a drink when I have had a particularly bad or frustrating day, and I realised that occasionally I will want a drink simply because I am bored.

During June, I had several days that were really tough going work-wise. There was also a fair few family dramas or issues to work through. Throw in some painful and frustrating physical stuff and 1.5 days lost ‘chatting’ to Apple over new phone issues – and I think you get the picture.  There were at least one or two occasions when I really, really wanted a drink. And got very, very, very frustrated when I couldn’t have one. (Nothing like the power of denial to increase something’s attraction).

But by making my intentions so public, I felt externally accountable. I’ve recently done some work on what Gretchen Rubin calls ‘The four tendencies’ (a personality profiling method) and one of the things I have discovered about myself – and wish I had known and understood years earlier – is that in order to achieve / do things, I need to have external accountability. Internal accountability alone won’t make it happen for me, no matter how badly I want it to transpire.

Equally important a lesson was in the value of having a purpose. One that was personally meaningful. When I’ve attempted Febfast in the past (once actually successfully) it was more about proving I could actually do it. I knew any funds raised were going somewhere towards doing something good. But it was a vague and tenuous link.

This time, there was a real person that I could picture I was doing this for. A lovely bloke I’ve met a few times. And then there was his tiny little newborn baby.

On one particularly tough day, Yoda sent me inspiration via this photo. 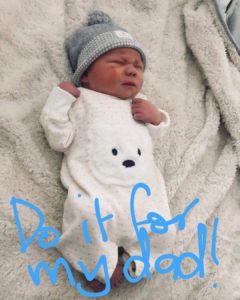 How could I not keep going with this little cutie as my muse?

Having this purpose, this motivation, also helped me to be courageous. To step out further from behind my brand and do a live recorded post on Instagram and Facebook asking for donations. 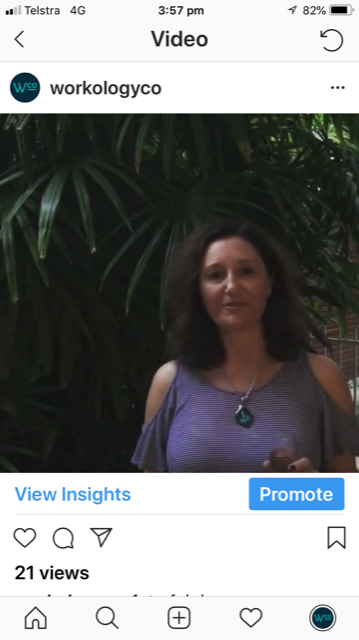 And even though the donations that I hoped for have not exactly rolled in, it feels good that I was able to play even a small part in raising awareness.

I’m also happy with what I have learned about myself, and proud that through this process I found the courage to take steps to peek out from behind my brand.

Workology Co will match all donations made until the end of July. So if you are feeling generous after reading this, the donation link is here.